A mural at Hubert Elementary, closed since 2005. “Unless someone like you cares a whole awful lot, nothing is going to get better. It’s not.” 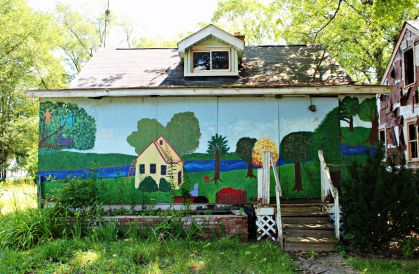 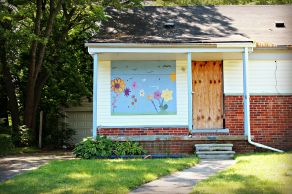 Beautiful flowers in a neighborhood garden

Another home soon to be demolished

At Hubert Elementary, closed since 2005

This house on Lamphere will be demolished soon

A mural inside a blighted home that has been turned into an art/play space for local children.

Murals inside a blighted home that has been turned into an art/play space for local children. 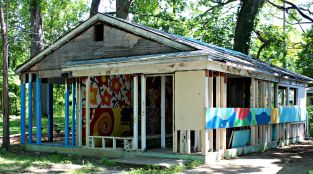 Today I volunteered with Neighbors Building Brightmoor (NBB) in the (you guessed it) Brightmoor neighborhood of northwest Detroit. I worked alongside about 80 volunteers from Lifechangers International Ministries, which has had a summer volunteer program for high school and college students in Brightmoor for the last several years, to clear overgrowth on three lots surrounding a soon-to-be-demolished home so that NBB can expand a community garden. The gallery above represents what I saw as I made my way around the neighborhood after we finished work for the day.

Brightmoor developed in the 1920s as a residential neighborhood for working-class families employed in the auto industry. The houses there were small and modest, meant to provide lower-income families with a way to own their own homes rather than rent. Families rushed into the neighborhood during the auto industry’s heyday, when the city couldn’t provide housing for its growing population fast enough, but after roughly 40 subsequent years of population decline due to the loss of the auto industry and crime, Brightmoor was designated a “Hardest Hit” area because of its extremely high levels of abandonment and decay (this is why it was/is popularly known as ‘Blightmoor‘), and thus received federal funding to address the high number of blighted single family homes and illegal trash dumps in the neighborhood. In June 2013, the nonprofit Detroit Blight Authority, along with various philanthropic and volunteer organizations, cleared 500 lots and demolished about 70 vacant houses. In August of the same year, the Detroit Blight Authority organized the “Blight Elimination: 100 Houses” initiative, aiming to demolish 100 structures in about 6 weeks.

These community and privately-funded efforts, along with federal funding, have resulted in drastic changes for the neighborhood in the last 5 years or so. It now has several neighborhood farms and gardens, various youth projects and community organizations (the youth farm, where local students grow food and take it to a farmers market to sell, is doing really well), and fewer vacant homes and trashed lots. Blight is still an issue here; you can see plenty of structural blight in the photos I took. But most of these homes have “Will Demolish” signs from the city on them, with specific dates for when the lot will be cleared, and from what I heard today while working with Neighbors Building Brightmoor, the city usually does demolish relatively close to the time it says it will (though I did notice signs without dates or with dates). Not only that, but many of the blighted homes I saw and documented have been boarded up to prevent access and made into works of art or even advertisements for the neighborhood’s harvest festival.

One resident I spoke to, one of the main organizers at NBB, mentioned that because Brightmoor homes are more modest and so many have been removed now, blight doesn’t have as much of a visual and and psychological impact on residents; a couple of small boarded-up or burned-out bungalows in the middle of an otherwise populated street with plenty of green space doesn’t draw the same level of negative attention that many of the larger abandoned homes elsewhere in the city do. And despite the remaining blight, you can see that there’s a lot of hope and pride in this community, and a lot of people are working really hard to make the neighborhood safe, beautiful, and sustainable.

The community’s five abandoned schools are a continuing problem, however. The structures are up for sale by Detroit Public Schools, but lie vacant and completely open (I could have just walked right in the front door of Hubert Elementary, abandoned for 10 years, if I’d wanted to). The areas around the schools are still very active, and having a large, vacant structure taking up an entire block presents dangers for the community because it will continue to attract scrappers, vandals, and arsonists until it is torn down or repurposed. Much of the blight removal/remediation efforts in Brightmoor prior to the Hardest Hit designation and intervention from other organizations and agencies were carried out by residents themselves…but unfortunately, neither the neighborhood nor the city has the resources right now to remove these larger structures.