Last week I visited the small ghost town (“spookstad” in Dutch) of Doel in northwest Belgium. Doel has been at the center of an international controversy for the last two decades as the Port of Antwerp encroaches on the village to make way for a new container dock. In the late 1990s, the government began offering residents cash premiums to sell their homes. Many residents took the offer because the government had warned that if they didn’t, their homes would eventually be expropriated and they would receive little compensation. A group of holdouts has remained, however, actively protesting the town’s demolition.

Doel began as a medieval settlement and was established as a town in the 17th century. It’s home to several historic structures and landmarks, including Belgium’s oldest surviving stone mill (built in 1611) and a house that once owned by the family of Flemish painter Peter Paul Rubens. Doel’s population has fallen from about 1,300 in the 1970s, to 350 in 2007, to 25 in 2014. A New York Times article published in April 2016 stated that all but one property owner had sold their houses to the government at that time, and the last was in negotiations. But some residents who sold their homes have opted to stay on as renters/squatters until they are evicted.

Doel’s remaining residents and supporters formed the organization Doel 2020 in 1998 to save the town, and they’ve repeatedly brought (and won) court cases against the government to preserve Doel as a “habitation zone.” EU’s strict environmental laws have also worked in their favor: Doel is home to one of Europe’s largest swallow colonies. Despite these efforts, however, the government is moving forward with its plan for the expansion of the port, and it’s only a matter of time before all remaining residents Doel are evacuated. Doel 2020 is currently fighting for the preservation of the town’s historic structures and monuments, asking that several of them be dismantled and relocated before the town is demolished.

After the exodus of the late 90s, Doel’s remaining inhabitants started envisioning their town as an open-air street art museum, and they invited artists from all over the world came to display their work there. In those early years, the art often had a political message that reflected the residents’ resistance to the governmental takeover, but other artists (and vandals) came and used the town as a canvas, as well, likely realizing there was no police presence to stop them. Now there’s a small tourism industry in Doel, and all of this activity has drawn international attention to the town’s plight. This attention comes at a high cost, though: residents continually struggle with vandalism, looting, and violations of privacy, including break-ins and noise pollution. Many, but not all, buildings are secured to prevent entry, and residents have posted signs around town to indicate which houses are occupied (“dit huis is bewoond”) and remind visitors that Doel is an inhabited town and visitors need to respect its residents. Fortunately, I witnessed little trespassing and no vandalism or noise pollution while I was there.

I visited Doel on a beautiful Sunday afternoon, and the town was bustling with activity. Families strolled down the empty streets and parents photographed their children with the street art. A wedding party was also using the town as a backdrop for their photos. Groups of teenagers in what appeared to be hazmat suits were working on a film project, and bikers and car enthusiasts parked in the town’s common areas to show off their rides. The town’s two cafes–one of which is housed in the historic windmill–were full of people enjoying drinks and lunch.

Doel operates more like a historic park than a dereliction tourism site; it reminds me of the ghost town of Bodie, California (without the protected status). Most of the town’s inhabitants left in a relatively short span of time, leaving behind empty homes, schools, and businesses…all of this vacant and unused infrastructure, along with the extensive street art and the knowledge that the entire town will be gone in the very near future, draws visitors in. It’s a unique location, and I think people enjoy documenting the town as a form of memorialization (for example, the video above discusses how Doel will soon exist only in memory and photographs). But the town’s natural, rural beauty and its location right next to the water seem to be as much of a draw as the dereliction and public art. 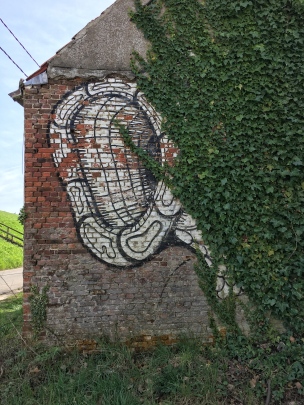 The sign reads “Doel–Inhabited Town. Respect the residents. Do not enter the houses.” 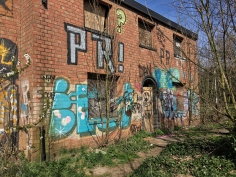 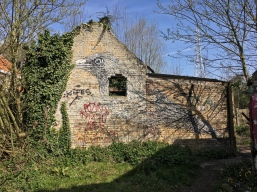 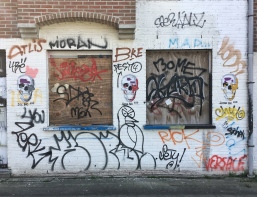 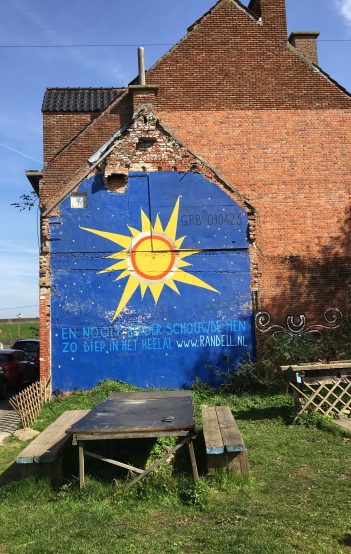 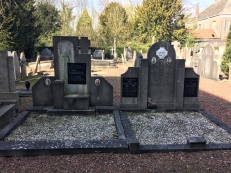 The town’s cemetery and church are well-maintained

A bride and groom pose for wedding pictures